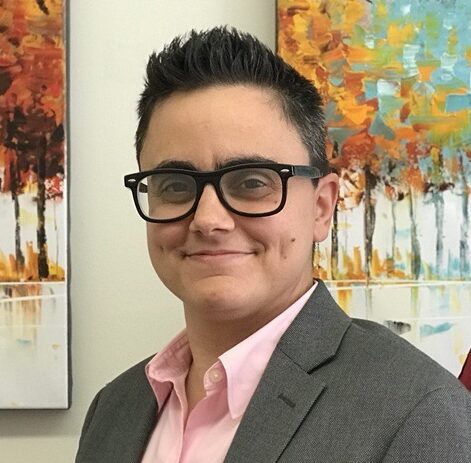 Celeste Fiore’s work as an LGBTQ educator, activist, and advocate began when they were an undergraduate student at American University in Washington, DC. Celeste led AU’s LGBTQ undergraduate organization, and was later the president of Outlaws, the LGBTQ law student group at Rutgers University School of Law in Camden, where they earned their Juris Doctorate. Most recently, Celeste founded the TRANS AFFIRMING ALLIANCE, a New Jersey Non-Profit Corporation, and is the Chair.

Celeste holds a number of appointed positions that allow them to advocate for LGBTQ rights on county and state-wide scales. To name a few, they serve as a Trustee of the NJSBA, they are the immediate past Chair of the LGBT Rights Section of the New Jersey State Bar Association, a member of the Section’s Legislative Committee, the Essex Vicinage’s Advisory Committee on Diversity, Inclusion, and Community Engagement, and the New Jersey Supreme Court Advisory Committee on Public Access to Court Records. Celeste also regularly presents on and writes about LGBTQ issues. They have written for numerous publications, including the American Bar Association’s Solo and Small Firms publication and most recently New Jersey Psychology’s special section on transgender issues. Their presentation credits include cultural competency trainings at a wide variety of companies, and panels at the NJSBA Mid-Year meeting and the National LGBT Bar Association’s Lavender Law Conference among many other engagements.

As one of few out non-binary legal professionals, Celeste’s practice at Argentino Fiore Law & Advocacy LLC consists of family law, civil rights litigation, school law, special education and anti-bullying work, as well as providing legal assistance for the transgender and non-binary identified community, all the while, advocating for the advancement of LGBTQ rights in general.

Celeste uses the pronouns “they/them/theirs” and often conducts trainings as to LGBTQ and NonBinary competency to businesses and organizations. To learn more about opportunities for Celeste to come work with your team, contact our office today! 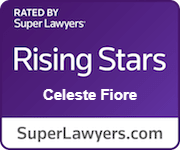 Celeste Fiore was selected to the list of Rising Stars from 2017-2020. A description of the selection methodology can be found at www.superlawyers.com/about/selection_process_detail.html. No aspect of this advertisement has been approved by the Supreme Court of New Jersey.