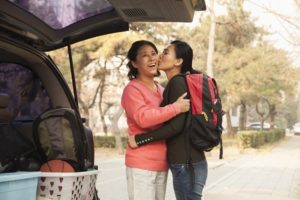 Parents are obligated to pay child support until such time as their children become emancipated. New Jersey Courts will deem a child emancipated when it finds that the child has moved beyond their parents’ sphere of influence. Dolce v. Dolce, 383 N.J. Super. 11, 17-18 (App. Div. 2006).  Although eighteen is the age of majority, a child who reaches that age is not automatically emancipated. Filippone v. Lee, 304 N.J. Super. 301, 308 (App. Div. 1997)

Common emancipation events include the child’s marriage, entry in the military, death, graduation from high school without continuing their education, or graduation from vocational training or college. Parents often specify these emancipation events in marital settlement agreements and custody agreements. Parents often disagree on whether a child is emancipated in the context of the child’s voluntary extended absence from college. Until recently, such an impasse often resulted in the parent paying child support filing a motion with the court to terminate their obligation.

On February 1, 2017, N.J.S.A. 2A:17-56.67 went into effect. The statute codified marriage, military service and death as emancipation events warranting a termination of child support as a matter of law. The statute also mandated that child support orders monitored through the Probation Department would automatically terminate upon a child reaching the age of 19.  The Probation Department sends out 2 “Notices of Proposed Child Support Obligation Termination” form prior to the child’s 19th birthday.  A separate form, titled “Request for Continuation of Support” must be completed by the receiving parent and returned to Probation no later than 45 days prior to the child’s 19th birthday.  The form must include a proposed date of termination of support which may not extend beyond the child’s 23rd birthday, as well as proof of the child’s full-time enrollment in school or proof that the child has a disability that existed prior to their 19th birthday.  Cases involving disabled children over the age of 23 are governed by a separate legal standard and separate judicial department.

As such, the events that trigger a child’s emancipation (as well as the exceptions) have not changed. However, the initial burden is now on the parent receiving support to prove that the child is still in need of support.

At Argentino Family Law & Child Advocacy, LLC, we know how important your family is to you, and we want to do everything we can to help you through the legal situation that you are currently facing. We are here to listen to your concerns, explain the law and the legal process to you, and present all of your options. Together, we can work toward the goals and make the decisions that are right for you and your family. Contact our office today by phone at (973) 868-0958 or via email at info@argentinolaw.com.