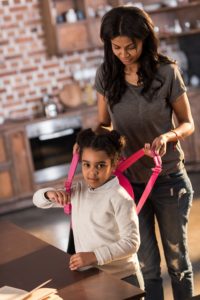 In past decades, one parent (usually the mother) received sole custody of any children after a divorce, with the child’s other parent having very limited parenting time. The historically traditional arrangement whereby a noncustodial parent visits with the children every other weekend after a divorce is becoming increasingly rare in today’s world. To that end, state legislatures across the country have been introducing bills that would substantially change the legal standards for courts to follow in issuing custody and parenting time orders. According to a recent Washington Post article, more than 20 state legislatures have considered legislation designed to promote shared custody of children following their parents’ divorce. Kentucky has successfully passed such a law, as did the Florida legislature; however, the Florida governor vetoed the bill. New Jersey now has joined these states in proposing legislation aimed at normalizing collaborative parenting following divorce.

The New Jersey legislature recently introduced two identical bills (A5189 and S3479) that would change how courts determine child custody in the state of New Jersey. If one of these bills becomes law, a court would have to presume that custody and parenting time would be divided equally – or close to equally – between divorcing parents, even if the parents do not agree to the arrangement. The legal presumption would be that “an award of joint legal and physical custody is in a child’s best interests.” In any proceeding involving child custody, the law would require that there be a “rebuttable presumption of joint legal custody and equal or approximately equal physical custody.” Under this proposed law, if one parent wants an alternative custodial arrangement, it would be his or her burden to rebut the presumption of joint physical custody. In order to rebut this presumption, the parent would have to prove by clear and convincing evidence that joint physical custody is harmful to the child. If the parent successfully rebuts the presumption, then the court may award primary physical custody to one parent, or sole custody to one parent, or whatever custodial arrangement is in the best interest of the child.

While shared parenting often is in the best interest of a child, there are also situations in which such an arrangement can put a child at risk or eliminate protections for domestic violence victims and their children. At Argentino Family Law & Child Advocacy, LLC , we know how to handle all of the different issues that New Jersey cases involve with respect to families and children, including issues related to child custody. We pride ourselves on always being up-to-date and knowledgeable any legal developments involving New Jersey family law. We also understand how emotional and stressful these types of cases can be, which is why we are here to help guide you through your legal proceedings as simply and efficiently as possible. Contact our offices today to set up an appointment with one of our highly experienced lawyers and see what we can do to help with your case.