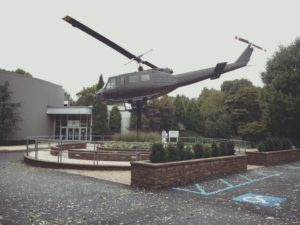 The New Jersey Vietnam Veterans’ Memorial and Vietnam Era Museum is the most somber and important locations I have visited.  My husband and I stopped by one Saturday afternoon in October on our way back from a random beach.  As we pulled into the parking lot, I was taken aback by the fully-restored UH-1D helicopter (more commonly known as the Huey) perched on a pole right in front of the museum.  Upon entering the museum, we noticed that we were the only visitors there.  A friendly gift shop cashier suggested we take a guided tour with a veteran.  Our tour guide, Jim McGinnis, was incredible. He guided us through the entire grounds, starting with the US War Dogs memorial, which was erected to honor to tens of thousands of dogs and their handlers that have served in the Armed Forces since World War I.  Jim regaled us with stories of his tour of duty in Vietnam while also showing us dozens of pictures he took.  The Memorial itself is an open area surrounded by 366 black granite panels arranged in a circle.  Each panel represents month and day, and lists the names of the New Jersey residents who sacrificed their lives during the Vietnam War, on that particular day, along with the year they passed away.  The museum offered an informative juxtaposition of the happenings of pop culture in government leading up to, and through, the Vietnam War, both un the United States and in Vietnam. On our way out, Jim began telling us the story behind the Huey on display in front of the museum.  When I told him that I was a student pilot, we instantly bonded and shared stories of our respective experiences in helicopters (with his stories being exponentially more exciting than mine).  I highly recommend this location for students, veterans, history buffs, and military families.