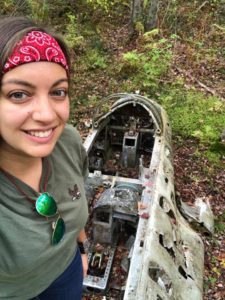 On October 7, 2017, my husband and I ventured into the woods of West Milford to find an abandoned military jet.  We had GPS coordinates (41.077076, -74.396896) and a bird’s eye view picture of the area courtesy of Google maps.  We parked at the end of a dead-end road and ventured into woods where woodland trails gave way to mud with the consistency of quicksand and tar.  About 500 feet in, we came upon the skeletal remains Lockheed T2V-1.  You might be wondering why there is an abandoned airplane in the middle of the woods in northern Passaic County.

Circa 1962, this particular Lockheed T2V-1 took off from Floyd Bennett Field in Brooklyn for a training exercise. The aircraft experienced trouble over New Jersey.  The two occupants attempted the eject from the aircraft but the ejection mechanisms failed, thereby trapping the two occupants inside.  The men crash landed in the middle of the woods, but suffered only minor injuries.  The Navy later removed the aircraft’s engine.  The remainder of the aircraft still lays decaying in the elements more than 55 years later.

Hikers and adventurers have stripped the aircraft of any and all removable parts, such as its instruments.  More than 5 decades of weather wear and tear has erased all of the paint and insignia from the fuselage.  The nose of the aircraft lays 50 feet south east of the main wreckage, apparently dragged there by overly-ambitious, unsuccessful thieves.  The rivets holding the body panels together showcase the craftsmanship that went into building this generations-old aircraft.

I would recommend visiting this site to anyone who enjoys hiking, aviation, or military history.  The area around the plane is riddled with shoes that came right off of unlucky visitors due to the unforgiving mud, so I recommend double checking your laces before you stray off the main road.